Rutgers Packaigng Engineering students participated in Packaging Jamboree 2018 at MSU and had great time for 3 days. Here are some pictures and comments from our students about the different activities: 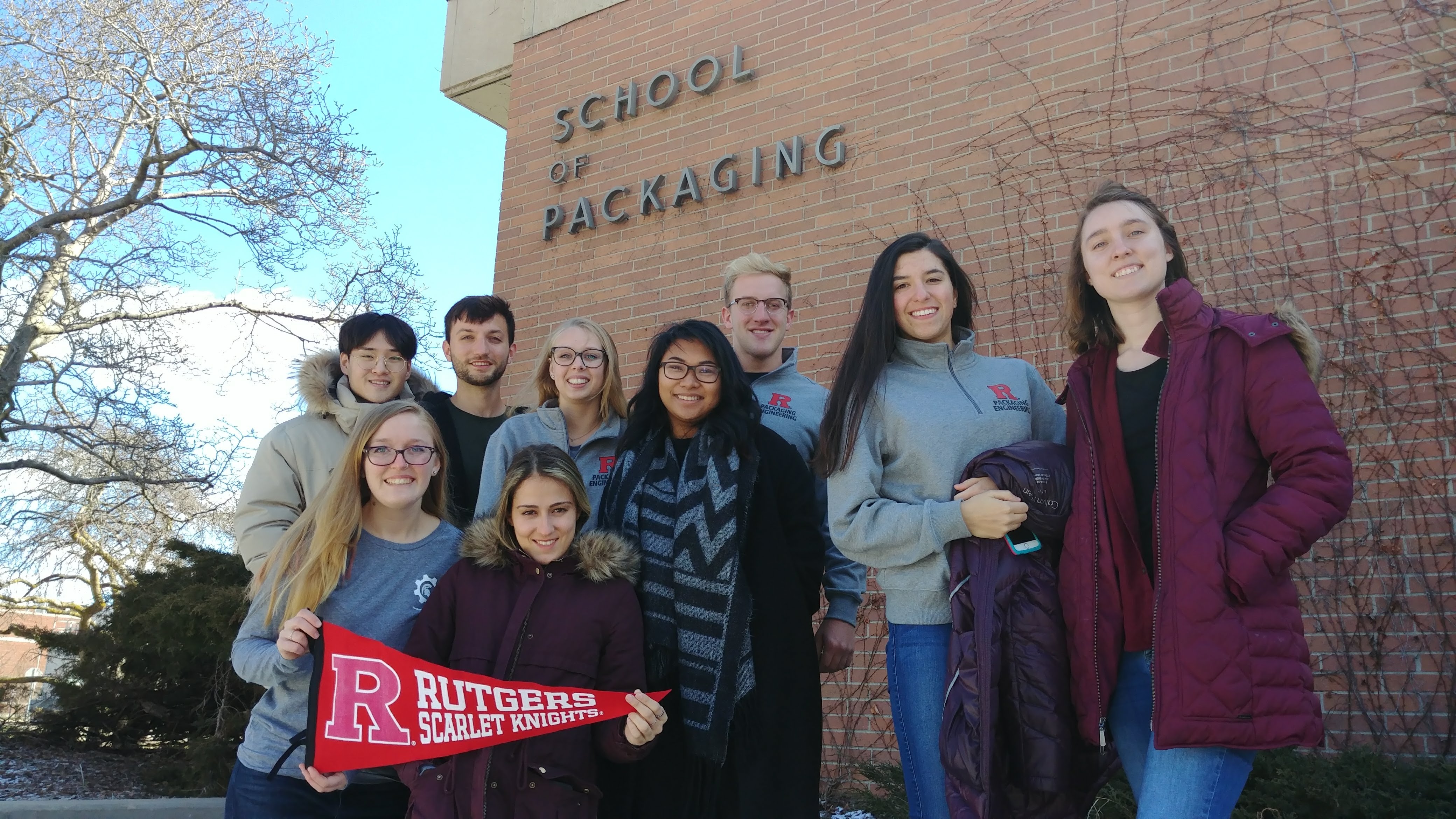 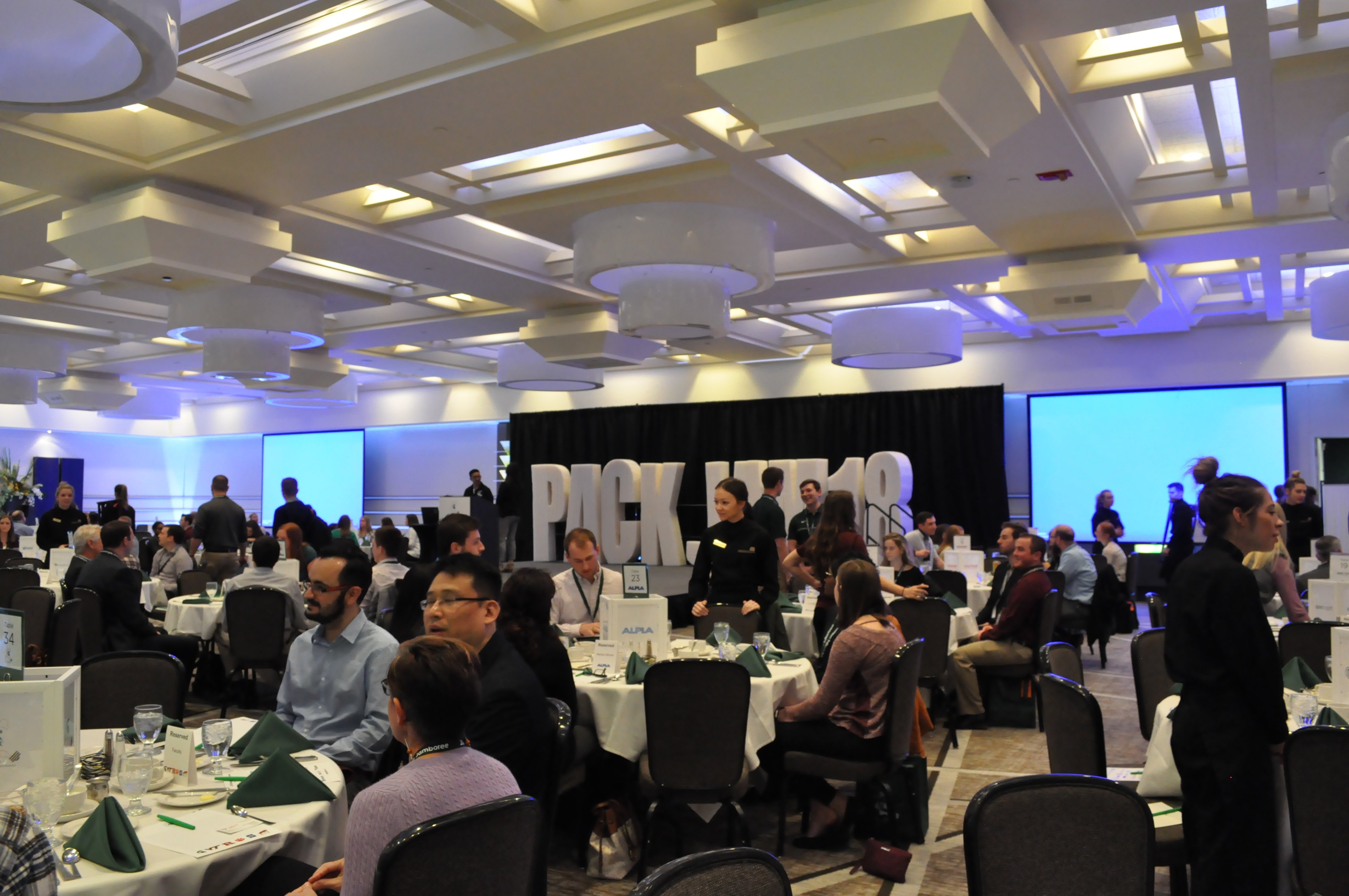 About Keynote Speaker by Dominique Santos 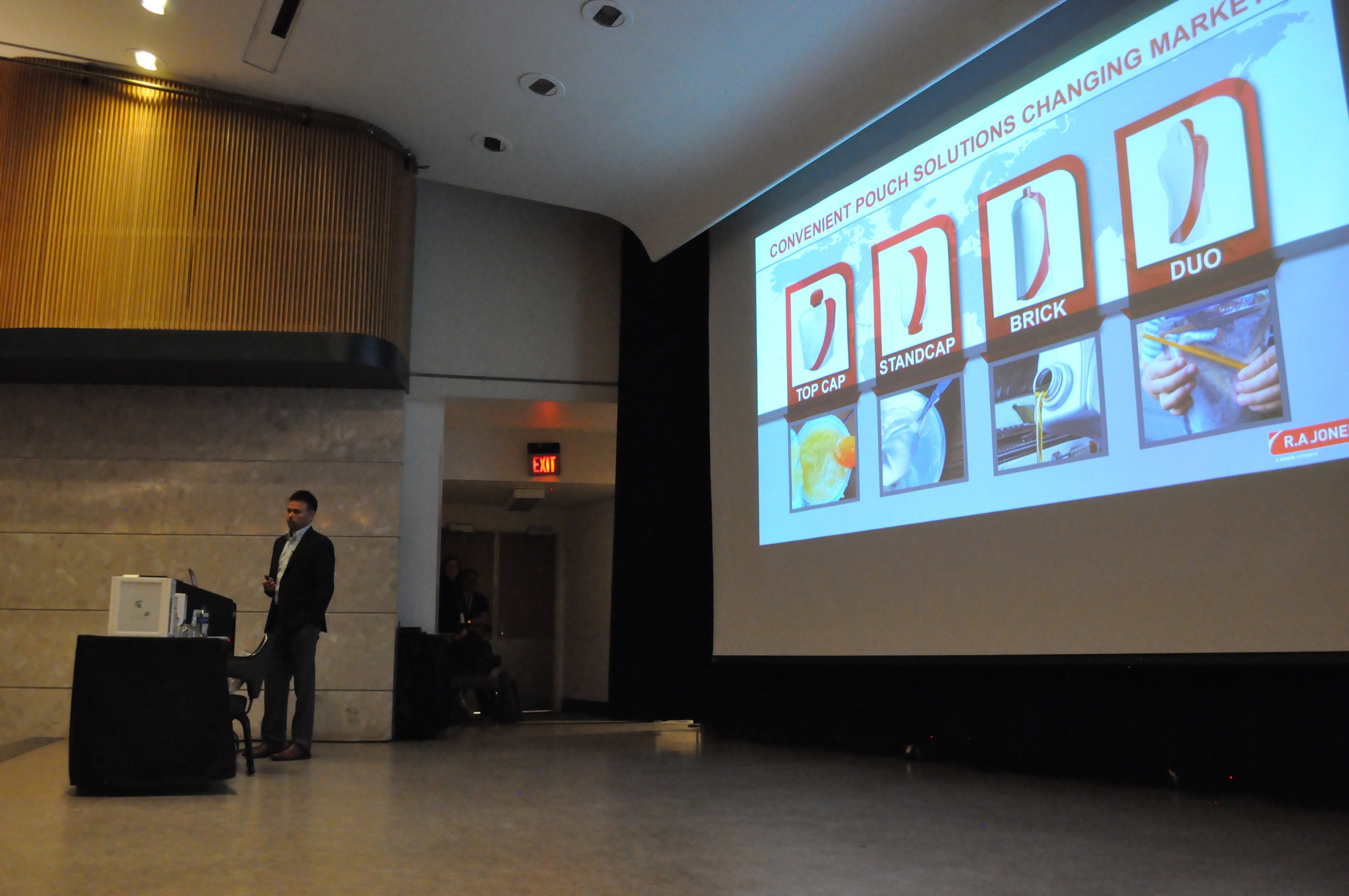 Packaging Jamboree is a student-led conference for packaging students and professionals within the industry held annually at one of the few college campuses containing a packaging program. PackJam 2018 was held at Michigan State University in East Lansing, MI. The three-day conference consists of educational, networking, and professional development opportunities for both students and industry professionals. The conference revolves around a central theme, and the theme chosen for PackJam 2018 was “Innovation in the Packaging Industry.” PackJam 2018 was very successful in expanding on the theme, and allowed my fellow colleagues and I to be inspired in being more creative and innovative in our academic careers. I was able to network with many individuals from the participating universities: Virginia Tech, Clemson University, Michigan State University, RIT, and University of Wisconsin: Stout as well as many professionals within the industry.

A concept that I got to understand more as the conference went along was where the Packaging discipline was located for each school. For Rutgers, our program is housed under the School of Engineering and allows the students to have a stronger technical concentration. This included the way we talk, the way we act, and the way we thought out a process in solving problems. The other participating schools had their Packaging program under a different discipline, and unleashed a more creative or natural science approach. This was intriguing to me as I will most likely be working with the same people I have the privilege in meeting at Pack Jam in the future and combing the skill sets will establish greatness in the industry.

One of the highlights of the trip were the Keynote speakers, in which the itinerary consisted of three speakers. The one Keynote speaker that sparked an interest in me was Evelio Mattos, who is the Creative Director for Design Packaging Inc. and FORMA Structural Packaging, and writer of Packaging and Dielines: The Designer’s Book of Packaging Dielines. His presentation was aesthetically pleasing, and he divulged in his past and how reached to his current position today. He honed in on the concept of user experience and how to attack each aspect of structural packaging: The Brand, The Product, The Experience, The Process, and The Concept. He gave his own examples on each aspect and all were very inspiring and interesting. Additionally, he touched on how as students and those who want to be innovative and creative should continuously be sketching and creating everyday. As Packaging students, we are consistently trying to improve the structural components for products, whether it is in pharmaceuticals, cosmetics, luxury, or consumer. It is important for us to continuously build on our portfolios and share what we have through social media to promote excitement. Mattos encouraged us to go beyond the classroom and notes that there will be some missed opportunities sometimes, as he explained with a personal example with Quiksilver. He highlights that sometimes we may not know if we’re good enough or what to do next, but encourages us to go forth and become the gap that bridges all the aspects together in the industry for the future of Packaging. However, the takeaway is to share what we know as creators and packaging students, and find connections in mentors and become a voice in the industry. His speech along with his examples provided during the slideshow has inspired me to strive better in my craft and continuously improve not just as a Packaging student, but as a innovator.

John Minagawa works for a machinery company in Michigan called R.A. Jones, which is part of its Italian parent company, Coesia. John spoke to us about his background as well as some innovations that he and his company have worked on within packaging. R.A. Jones has a high speed pouch machine that has brought a multitude of innovation recently. Some of the pouch innovations we touched upon were the top cap pouch used for fruit puree packaging, standcap pouch used for sour cream, brick pouch used for motor oil, and the duo pouch used for fruit juice packaging. I thought the most interesting was the duo pouch. Time after time drinking fruit juices such as Capri Sun, the straw would always penetrate through the film, so having the straw preinserted into the film would prevent this from occurring. I was also pretty surprised to hear that ever since Daisy started using the standcap pouch for sour cream, the sour cream industry rose 18%. It was incredible to learn about how pouch innovations are really changing the market. 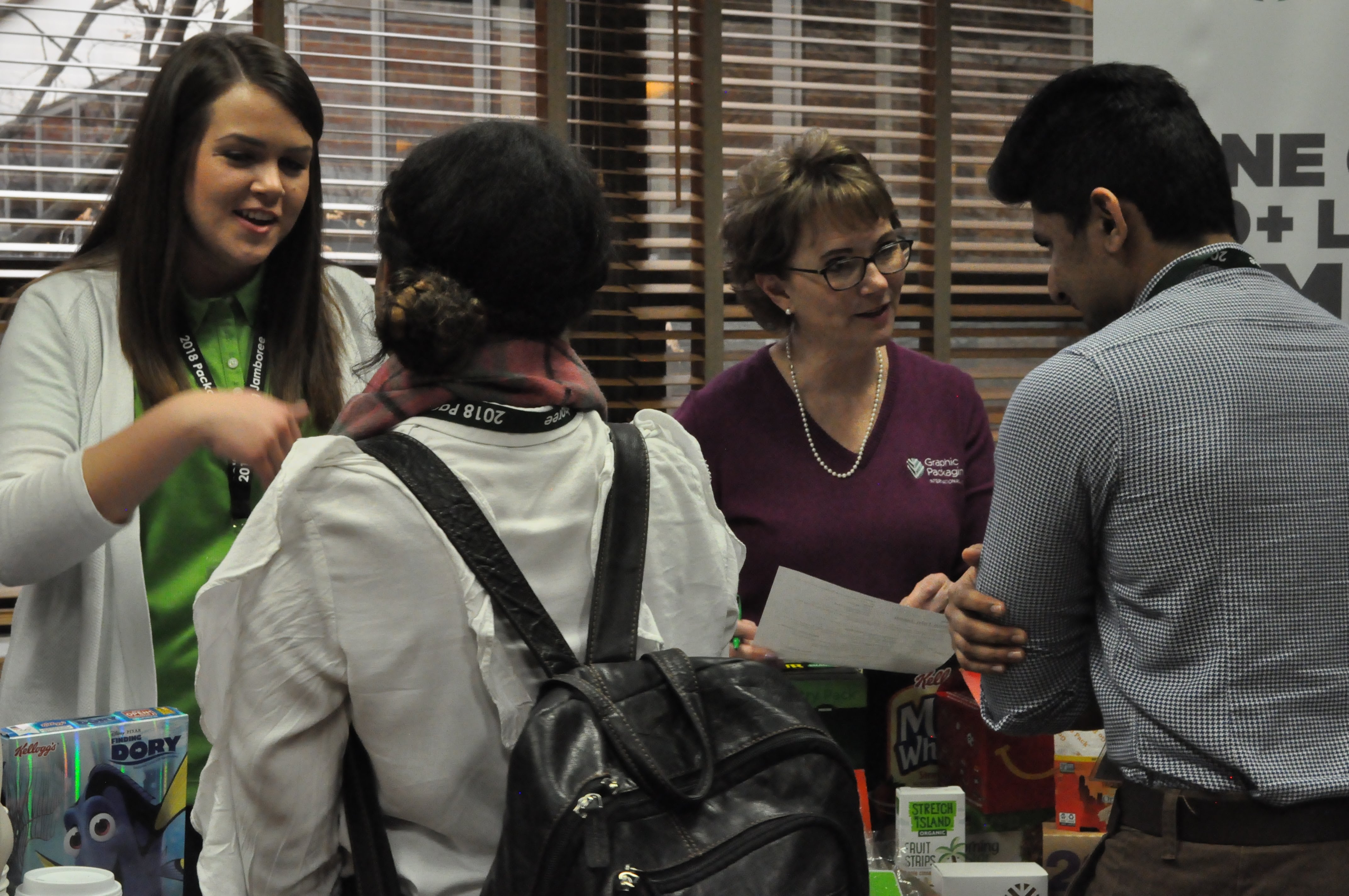 The Career Workshop, led by Evelio Mattos of the Dieline, taught students how to restructure their social media pages to positively impact their chances of landing a job, as well as who to follow and what NOT to post. He offered for everyone to connect with him on LinkedIn and ask him questions in the future about social media, design, or packaging. Overall, his talk was a great learning experience and precursor to the Sponsor Networking Fair. The sponsors were split into three rooms based on how much they donated to Packjam18. Students mingled in all three rooms with suppliers of flexible and rigid packaging, label producers, and consumer based companies. One highlight was Unilever, who had many travel size samples for people to take, even if they were flying home. Another was 3M, who gave out post-its and command hooks, supplies every college student needs. The most exciting part was the co-op and job opportunities advertised. Unilever had space for two co-ops in the coming year, and Alpha was looking for a full-time worker for an around-the-world training program, with six months guaranteed in Austria, a great opportunity for seniors looking for full-time work after graduation. 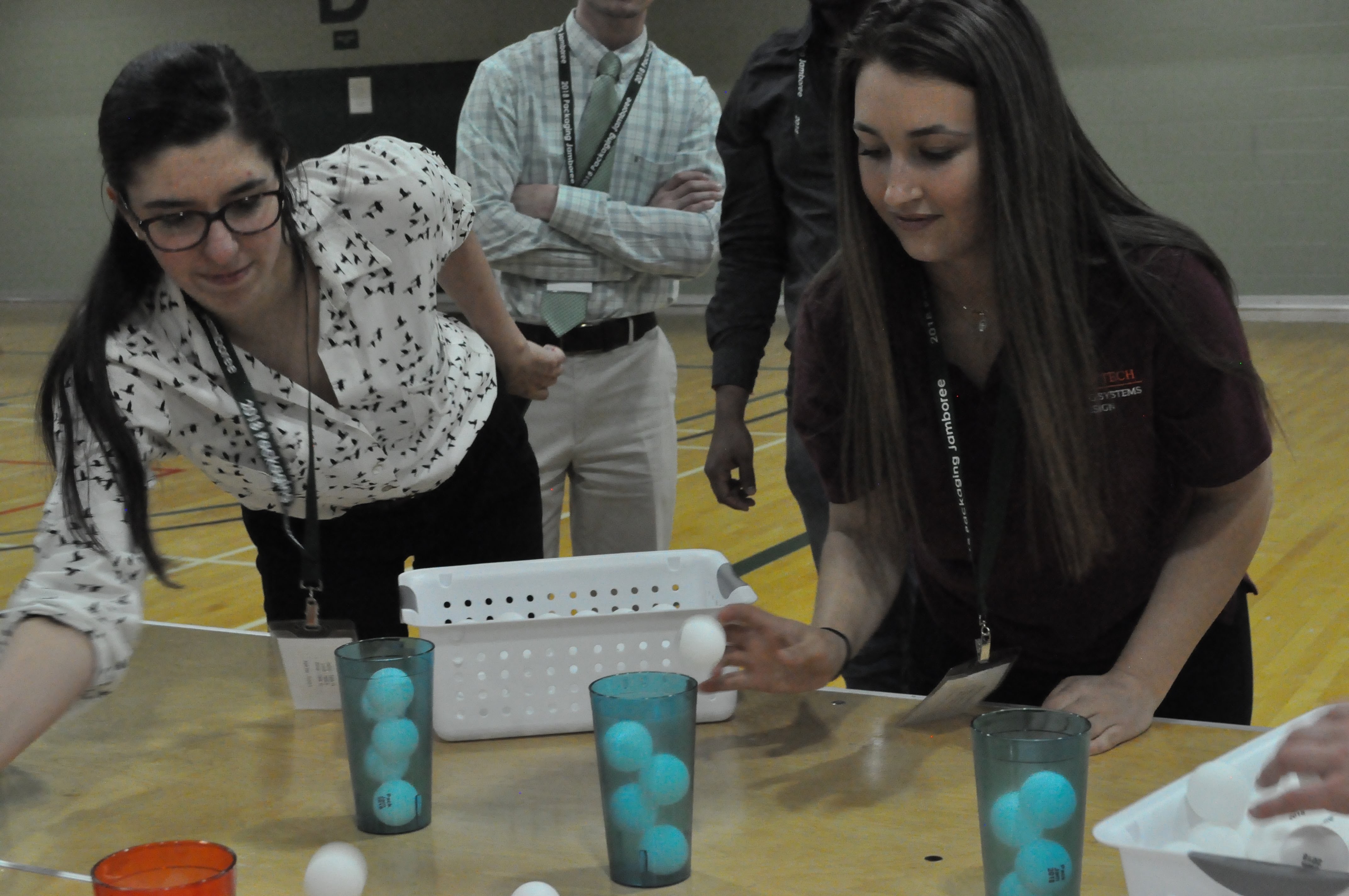 PackJam Field Day featured games tailored to both physical and mental challenges. Participants were split into teams of four or five and faced off against other teams. Some of the highlighted games included a PackJam puzzle featuring the sponsors, building a pasta marshmallow tower in just a few minutes time, and flipping cups onto bottles as fast as possible. Participants won candy for each competition their team performed well in, and walked away at the very end with PackJam '18 cups and ping pong balls. Some even won gift cards for winning one of the games involving unwrapping a saran wrap ball as fast as possible while other players rolled a die to switch. The whole event featured new friendships, teams from different schools, and a whole lot of fun. Working with other schools that focus on packaging, like Virginia Tech, RIT, and our hosts from MSU, was a rewarding experience that Rutgers students will not soon forget. 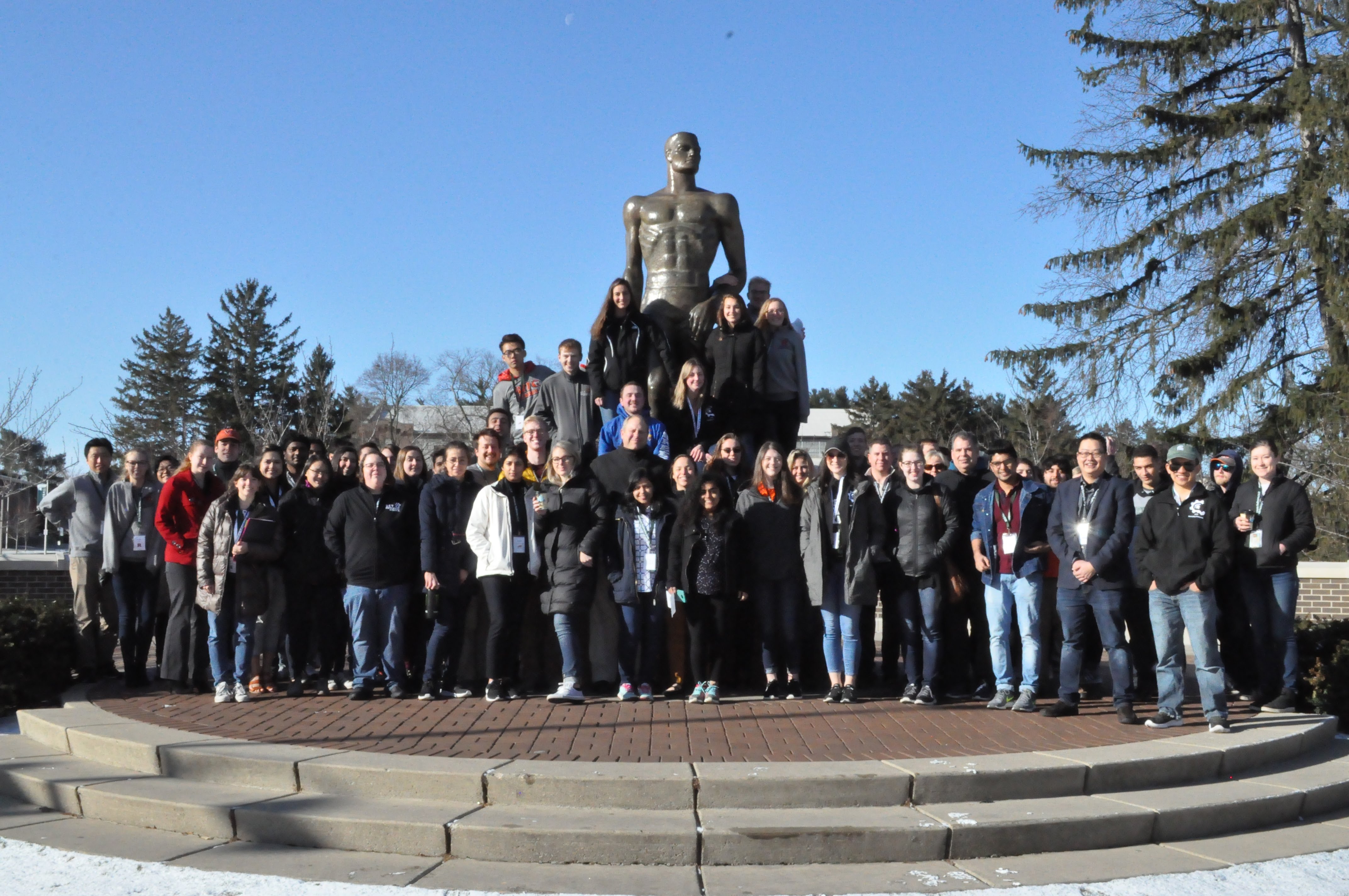 The last day at Michigan State University after having a breakfast together, we went on the bus for a campus tour. This was first and last event before closing remarks. On our bus, we had Hanna Holmi, an outreach coordinator for 2018 Packaging Jamboree, highlighted unique locations and landmarks of MSU. First thing she told our group was MSU campus is divided into Brody, North, East, River Trail, and South Neighborhood. In South Neighborhood is mostly residents that are athletic and engineers because in South Neighborhood it contains Spartan Stadium, Munn Ice Arena, IM Sports West, outdoor tennis facilities, computer lab, and the Engineering Residential Program. Then she said that lots of international students are living in East Neighborhood. During our tour, we stopped at Status of Spartan for a group photo. After we took a photo and settled ourselves in the bus, Hanna Holmi said their school of packaging was formed in 1952. It was one of the first majors that established at MSU. It could have been better if we had a chance to go inside of packaging building or other MUS buildings. Lastly, she explained they have two dairy stores in campus where they produce and sell their own cheeses and ice cream flavors. We did get an ice cream at the end of our tour which ended 2018 Packaging Jamboree as well. I had so much fun at Packaging Jamboree, it was an enormous experience. It was my honor to meet with students from different school and different companies that motivated once more about packaging. 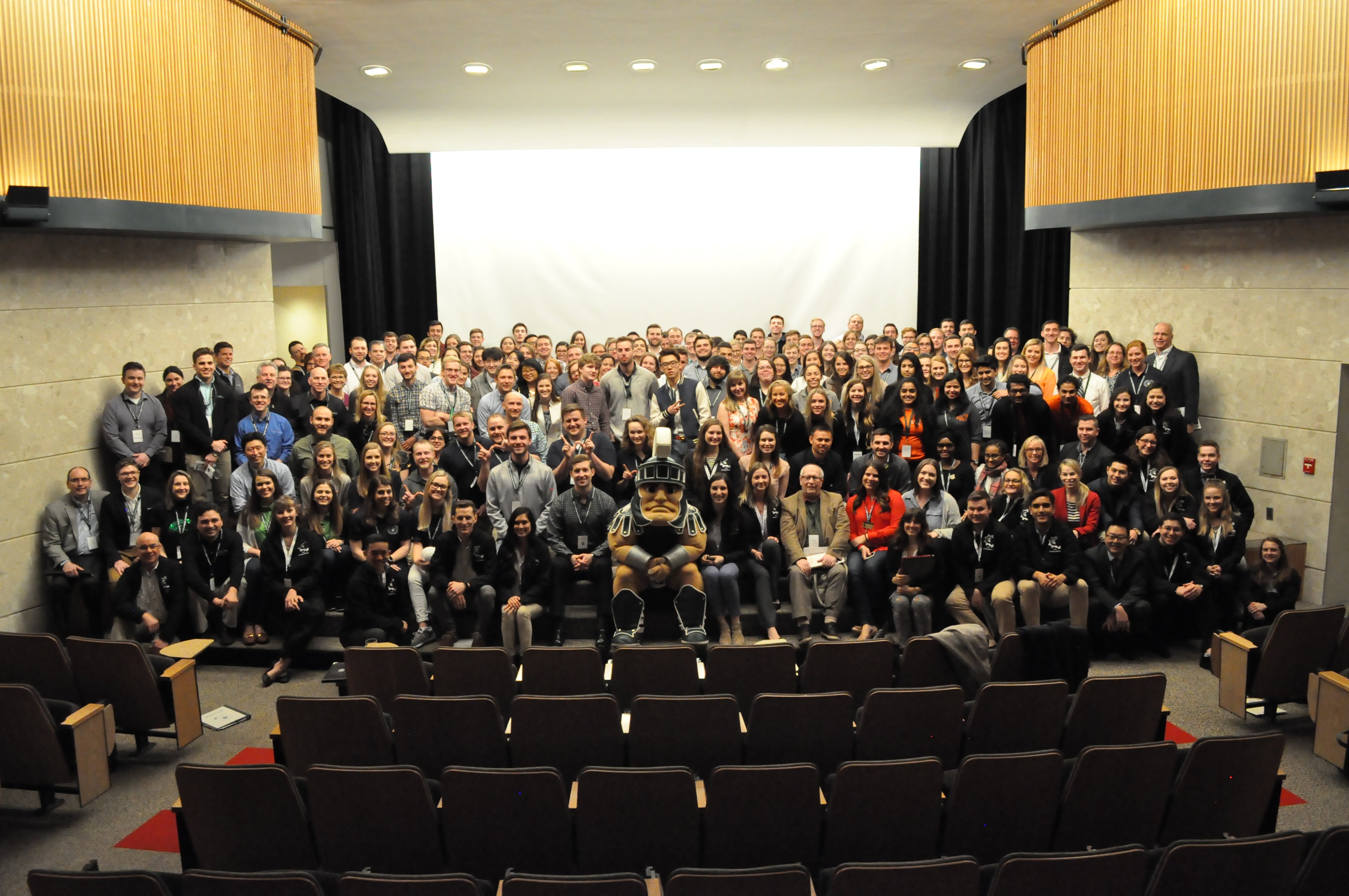